LCAT is a tool which supports local decision makers to plan and adapt to climate change. It is being developed by a partnership between the European Centre for Environment and Human Health, Cornwall Council, The Alan Turing Institute and Then Try This, alongside a wide range of local stakeholders.

The current iteration is a prototype and so is incomplete. We aim to launch later in 2023.

The Local Climate Adaptation Tool (LCAT) brings together complex climate models, adaptation options and health impact evidence to help the user understand the health implications of climate change in their local area. Importantly, LCAT also generates recommendations for appropriate adaptation approaches, based on the best available evidence, to support the health and wellbeing of local people. LCAT is being co-developed with, and for, local authorities and local service providers.

How does the tool work?

LCAT allows the user to select a local area of interest and see the predicted climate for this area over the coming decades. It combines these predictions with evidence on the health impacts of climate change from the scientific literature, to support local organisations to plan their adaptation actions. The aim is to enable the best possible health and well-being outcomes for local people. For example, planning cycle paths with shade for hotter summer months and protection from stronger cross winds in the winter, ensures people can continue to gain the health and wellbeing benefits of cycling in a changing climate.

The tool is free and open source, and is aimed at helping councils, the NHS and emergency services as well as local service providers to understand what is likely to happen and prioritise their climate adaptation approaches. 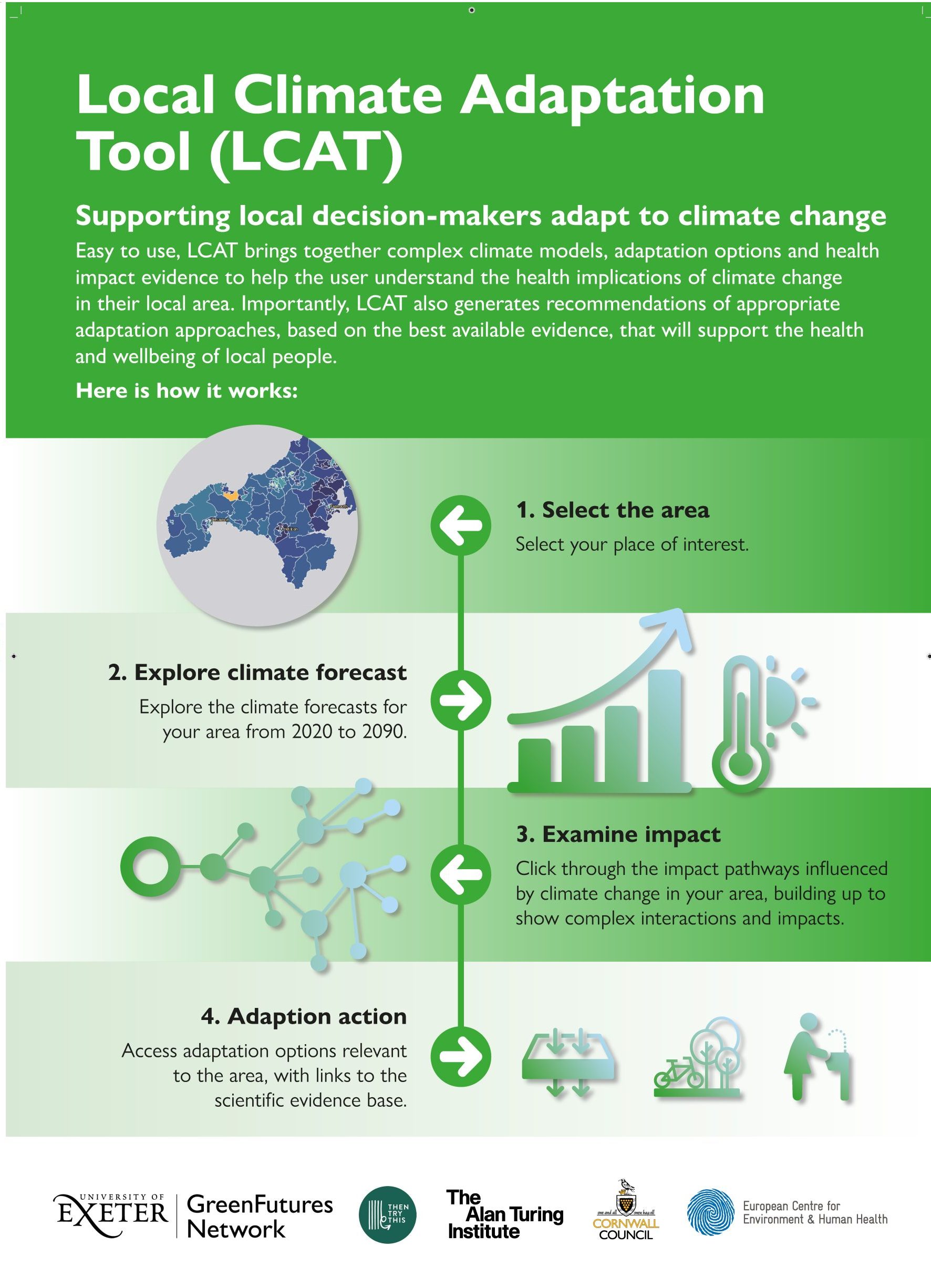 Why was LCAT developed?

A year was spent exploring how key stakeholders were adapting to climate change, what the barriers were to action and finding a common language that would allow decision making across traditional boundaries.

The findings were clear, very little action on adaptation was taking place and stakeholders felt unequipped to take action.

Stakeholders identified the need for:

These findings led to the creation of the Local Climate Adaptation Tool (LCAT) Project.

During the first phase, the tool used Cornwall and the Isles of Scilly (CIoS) as the pilot site and has since been developed to be used across local authority areas throughout the UK to support climate change adaptation action.

The tool is being developed in a staged approach. As of November 2022, the health impact maps look at heat (and cold).  The other risks will be added in 2023.

As it is developed further, updated iterations, with more data, content and evidence will be published. Using the UK’s Third Climate Change Risk Assessment (CCRA3) as the starting point, and in co-design with  stakeholders, key risk areas for inclusion in LCAT have been identified as: Heat, flooding and drought, extreme storms, sea level rise, social and food security.

Why does LCAT focus on different sectors?

The health and wellbeing impacts of climate change are complex and wide ranging. They cross-cut multiple sectors from healthcare, to housing, to infrastructure and more.

Those with least resilience to the effects of climate change are often vulnerable due to multiple factors including personal, social and environmental factors. For example, quality of housing, access to greenspace and poverty. It is therefore important that professionals across sectors and departments work together to understand and reduce those inequalities.

Why is health the major focus?

The use of a health lens provides a common ‘language’, relevant to all service areas, and facilitates a multi-agency approach to adaptation planning. Key to supporting informed decision making is a link to the evidence base. The tool identifies key, published evidence on health and wellbeing outcomes to support the recommendations and advice it will generate.

Is the tool hard to use or time consuming?

The tool has been designed to require minimal data input from the user, making it easy to use. This has been achieved by aligning a multitude of datasets, including climate data (rainfall, wind speed and temperature; both actuals and forecasts), health evidence, socio-economic and geographic data, and adaptation measures.

How is LCAT supporting health and economic equity?

Climate change impacts are not felt equally as many people are more vulnerable due to personal, social and environmental factors. Furthermore, climate change is likely to increase current inequalities.  Stakeholders involved in the co-design of LCAT have consistently voiced their concerns about deepening inequality and, as such, LCAT is being developed to provide datasets on vulnerable groups.

Using insight and data from Climate Just, as well as data from the Index of Multiple Deprivation, LCAT supports decision makers to identify who is vulnerable and therefore take a more equitable approach to planning adaptations.

Stakeholder engagement is ongoing as LCAT develops, providing the opportunity for local decision-makers and representative groups to engage in the co-design process. Currently, this is facilitated through a newly formed National Stakeholder Group who meet every few months to test the tool and provide ideas for future development. Following this, updates are made and new iterations released. While November 2022 saw the release of our ‘heat’ focussed version, we hope to release a version looking at flooding and drought in spring 2023.

For more information, please refer to our Frequently Asked Questions

Or please get in touch:  LCAT@exeter.ac.uk

A simple tool to help local authorities and other organisations use the latest evidence to adapt to climate change in ways that benefit human health has been highly commended in the international Climate Challenge Cup, announced last night as part of COP-26.

Nature on Prescription for Mental Health: Feasibility Stage for the ‘greENGAGE’ Trial Stage

A team from the University of Exeter and University of Plymouth are conducting a feasibility study of nature-based activities reached through social prescribing. The work is funded by have been…

OCTOBER 2022-2026 The impact of climate change on health risks due to pathogens in the environment, specifically in our coastal waters is being investigated by this £8.7 million Horizon Europe…