The purpose of this study was to report on the acceptability of virtual reality (VR) nature environments for people with memory loss at memory cafes, and explore the experiences and perceptions of carers and staff.

A qualitative study was conducted between January and March 2019. Ten adults with memory loss, eight carers and six volunteer staff were recruited from two memory cafes, located in Cornwall, UK. There were 19 VR sessions which were audio recorded and all participants were interviewed at the end of the sessions. Framework analysis was used to identify patterns and themes in the data.

During the VR experience, participants were engaged to varying degrees, with engagement facilitated by the researcher, and in some cases, with the help of a carer. Participants responded positively to the nature scenes, finding them soothing and evoking memories. The VR experience was positive; many felt immersed in nature and saw it as an opportunity to ‘go somewhere’. However, it was not always positive and for a few, it could be ‘strange’. Participants reflected on their experience of the VR equipment, and volunteer staff and carers also shared their perceptions of VR for people with dementia in long-term care settings.

The VR nature experience was an opportunity for people with memory loss to be immersed in nature and offered the potential to enhance their quality of life. Future work should build on lessons learned and continue to work with people with dementia in developing and implementing VR technology in long-term care settings. 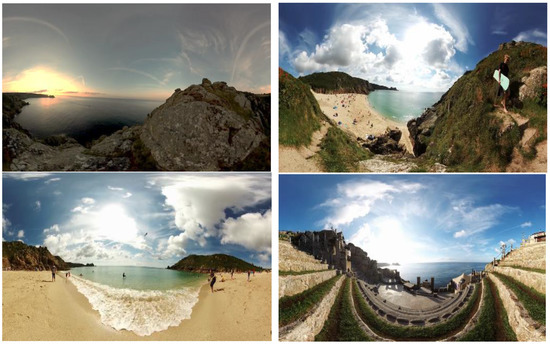 The participants engaged with the VR nature environments to varying degrees, with many responding with quite detailed descriptions and commentaries on what they were seeing, and others commenting less and attempting to remove the headset before the end of the session. For example, one man with memory loss was animated throughout the experience:

I’m on the beach. Haven’t been on the beach in ages! Ooh, it’s lovely. Which beach is it, maid*?…Oh now I’m under the sea! Look at all these fishes. It’s good innit? Wow!…and now there’s someone comin’ in on a boat. Hello! Ahhh. The waves are lovely (10-ML) [*a Cornish dialect word for girl].

Another participant was similarly engaged and then after one and a half minutes stated that she had had enough:

It’s sort of a forest thing, and it’s got a path…like mountains an’ that as well. It’s very nice…Oh wow I can see a beach now. Oh yeah, it’s a bit like Polzeath it is, with people on it. Oh yeah, people playing games an’ that on the beach. It’s hot ‘cause they got their shorts and t-shirts on. It’s very nice. Oh I can see a pink bucket as well. A…a very busy beach…very busy…oh yeah, very nice. [inaudible] they’re going out in the boat now. Oh yeah, there’s a chap going out on the beach—on the boat now. Ooh, very nice. I’ve had enough now (05-ML).

“It Makes You Feel That You Are There”

The VR experience often centred around immersion (and presence), and the opportunity to interact with others in a virtual world.
Participants reported that they felt immersed in nature: ‘at the sea’, ‘on the sand’ and ‘feeling the sand’ (“…It looks real, and you feel part of it” [06-V], “…with that, virtually, you’re in it, aren’t you? It’s fantastic” [11-V]):

Another volunteer participant reflected on how the VR experience meant ‘you were there, in nature’
There were some negative responses to the VR nature experience, finding them potentially confusing or strange, such as this carer:

Well from what I saw of the little bits, when she [her Mother] was at the beach, she obviously quite liked that. I think under the water was a bit confusing for her.” (07-C)

One participant said “Yeah, it’s quite strange actually, ‘cause it’s not quite real. It’s got a strange light to it. Sort of, edges on the figures and things” 12-ML), and at one point found it frightening:
This study shows that people living with mild to moderate cognitive impairment who participated in a VR nature intervention had a sense of presence in the nature environments. Despite the importance of presence in VR being recognised, few studies on immersive VR in dementia have attempted to establish participant presence [9]. Given that presence is a subjective experience, the qualitative approach used in this study contributes to a developing field of research where evidence is still limited. It also enhances our understanding of the wellbeing benefits that people with mild to moderate memory loss can derive from a VR nature intervention, and shows promise for those living in long-term care. Since people with advanced dementia in residential care are less involved in activities, the VR nature intervention could be a way of engaging them in meaningful activity—with support from carers. Future work should build on lessons learned from this study and continue to work with people with dementia in developing and implementing VR technology in long-term care settings.

What is the best way of delivering virtual nature for improving mood?

Exposure to ‘real’ nature can increase positive affect and decrease negative affect, but direct access is not always possible. For example for people in health/care settings who often experience chronic…

A team from ECEHH have been funded to evaluate the Government’s flagship Green Social Prescribing test and learn pilots programme. Social prescribing and community-based support enables GPs, other health and care practitioners and local agencies to refer people to a link worker who gives people time and focuses on what matters to the individual.

The Therapeutic Nature project was led by Dr Ruth Garside and was a collaboration between researchers at ECEHH, University of Exeter, PenCLAHRC, University of Plymouth and Exeter, NHS Born in Bradford and eftec. The report is aimed…